The Club Náutico Puerto Sherry was founded in 2009, focusing its main activity on the development of high level competitions, as well as events of great social and media impact. It is located in the marina that gives its name, in the north of the Bay of Cadiz, one of the best natural places for the practice of water sports.

Since its constitution, the Puerto Sherry Yacht Club has had as its social objective the promotion of the sport of sailing, being an institution that, for years, has been organizing, among others, regattas of great prestige such as the Sailing Yachts, Catamaran and Windsurfing Leagues of Puerto Sherry, with an event programmed for each month of the year. It is also worth mentioning the organization of the Spanish Championships in the J80, Optimist, 2.4mR and Catamaran classes between 2016 and 2019.

In the international level, special mention to our Classical Week, a biennial event that has taken a huge significance in the intercontinental sailing scene. This year will dispute its fifth edition from 15 to 18 July.

It should be noted that last year 2019, our Yacht Club organised one event of the TP52 circuit, a class that has become the most important in the world in single-hull boats, the “Puerto Sherry 52 Super Series Royal Cup” held between 18th and 22nd June. In Dinghy Sailing, highly praised by the International Sailing Federation (World Sailing), sailors and sponsors, have been the organization of the “Para World Sailing Championship” (July 1-7), for which Puerto Sherry made adaptation improvements in its facilities; and the “Techno 293 Class World Championship” (Oct. 26-Nov. 2) which brought together over 500 participants, among the nearly 400 sailors, coaches and accompanying persons.

This year 2020, we will continue with our passion for the sport and in addition to our Nautical Leagues and other regional and national competitions, a few weeks before the start of the Classic Week, we will host the “European A Class Catamaran Championship” (20-27 June) where we will be able to enjoy the speed and spectacularity provided by sailing in the Flying (foil) discipline.

We will be delighted to welcome you in our facilities located in the same Marina, office and social club situated between Las Suites and the Hotel Puerto Sherry. 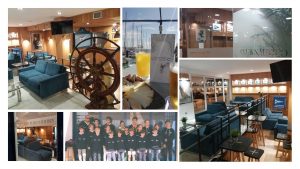 Carex The best logistics solutions for your business